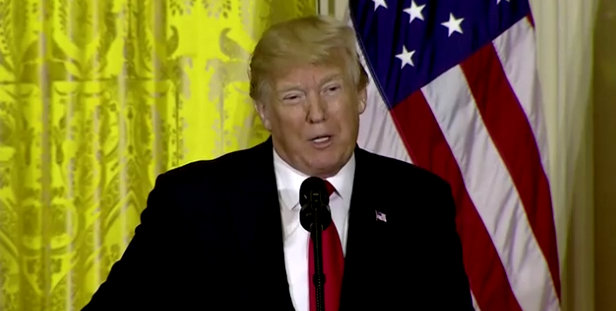 VERY STABLE GENIUS: Trump Lauded Delivery Of US Fighter Planes That Only Exist In “Call Of Duty” [VIDEO]

President Trump’s announcement of U.S-made F-52s fighter aircraft delivered to Norway may have rattled its neighbor Russia, the source of rising tension among NATO allies.

Was it a secret advanced jet capable of beating its Russian counterparts? A ruse to fool intelligence analysts? Neither, it turns out. The “F-52” is a fictional jet only available to fly if you’re a gamer at the controls of “Call of Duty: Advanced Warfare.”

Trump lauded the sale of the fictional planes alongside Norwegian Prime Minister Erna Solberg at the White House on Wednesday, remarking on the very real and growing defense relationship with America’s Northern Europe ally.