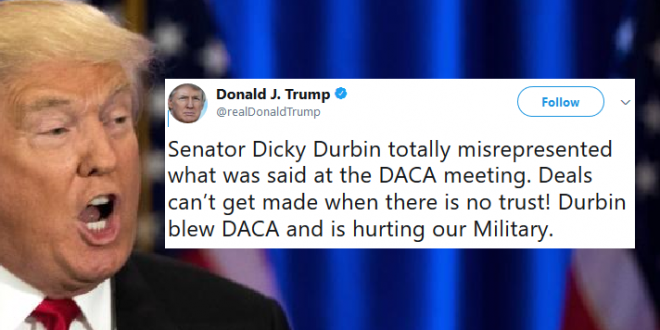 U.S. President Donald Trump on Monday blamed Senator Dick Durbin for blowing up talks on a deal to help immigrants brought to the country illegally as children and said the Democratic lawmaker from Illinois misrepresented his comments about Haiti and African countries.

Durbin has said Trump used the term “s___hole” when speaking about Haiti and African countries during the meeting about immigration policy at the White House last week. Durbin, who has been one of the lead senators in the efforts to protect Dreamers, stood by his account of the meeting.

“I know what happened. I stand behind every word that I said,” Durbin told reporters in Chicago on Monday. “In terms of that meeting, I’m focused on one thing — not that meeting — but on making sure that those who are being protected by DACA … have a future in America. I’m focused on that full time.”

Senator Dicky Durbin totally misrepresented what was said at the DACA meeting. Deals can’t get made when there is no trust! Durbin blew DACA and is hurting our Military.

The president of the United States would like you to know that he insists he did not say “shithole,” but did tweet “Dicky” https://t.co/e6YLWVB6ce

It took President Genius four days, and the best he could come up with was “Dicky.” Sad. https://t.co/rKTR8Vs8Q4

Damn it, Durbin!! Why’d you sign that EO to kick out a million taxpayers for no reason other than petty racism?? Jerk!! Dicky indeed!! https://t.co/0lOiYyqY9e

Previous MLK’s Son Has Hope For Donald Trump: George Wallace Was A Staunch Racist And We Transformed His Heart
Next Feds Warned Kushner About Rupert Murdoch’s Ex-Wife