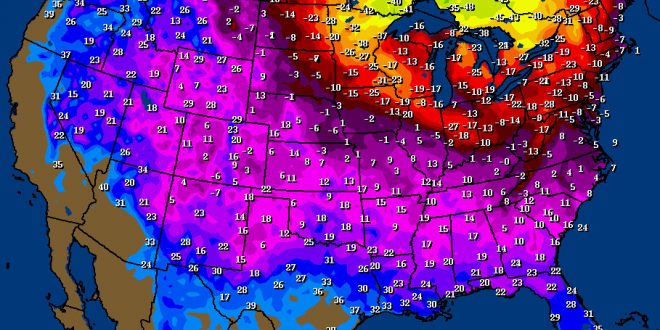 The day after a massive winter storm dumped more than a foot of snow in parts of New York, a bitter cold front is expected to hit the East Coast with record setting temperatures.

An “arctic outbreak” will keep temperatures about 20 to 30 degrees below average, with a wind chill advisory issued in the tri-state area.

The strong gusts, coupled with the frigid temperatures, will feel like 15 to 20 degrees below zero, according to the National Weather Service, which warned that exposed skin may succumb to frostbite within 30 minutes.

It’s so cold in Florida that iguanas are falling from their perches in suburban trees. Temperatures dipped below 40 degrees Fahrenheit early Thursday in parts of South Florida, according to the National Weather Service in Miami.

That’s chilly enough to immobilize green iguanas common in Miami’s suburbs. Palm Beach Post columnist Frank Cerabino tweeted a photograph of an iguana lying belly-up next to his swimming pool. WPEC-TV posted images of an iguana on its back on a Palm Beach County road.

Green iguanas are an invasive species in Florida known for eating through landscaping and digging burrows that undermine infrastructure. They can grow over 5 feet (1.5 meters) long, and their droppings can be a potential source of salmonella bacteria, which causes food poisoning.

A massive winter storm is moving out of the northeastern U.S. region, but flight disruptions will continue through the end of the week.

Airlines canceled 614 flights scheduled for Friday due to the storm, according to FlightAware, a plane-tracking site. More than 4,000 flights were canceled on Thursday as the storm brought high winds and snow that halted operations at some of the busiest airports in the U.S.

Travelers booked on Friday should check airline websites and apps for updates on schedules. While several airlines expect to resume flights, a bone-chilling cold is expected to follow the storm, so airlines will have to ensure their planes are de-iced before flying, a process that can cause delays. Also, poor road conditions could make it difficult for flight crews to reach airports.

Previous Tell-All Author Michael Wolff: Trump Has Less Credibility Than Anybody Who Has Ever Walked On Earth [VIDEO]
Next FLORIDA: Ron DeSantis Enters Gubernatorial Race