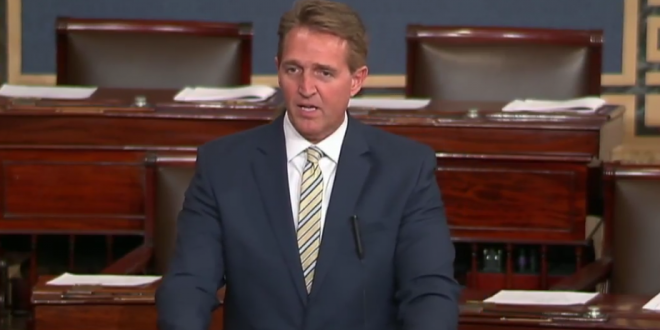 “2017 was a year which saw the truth – objective, empirical, evidence-based truth – more battered and abused than any other in the history of our country, at the hands of the most powerful figure in our government,” Flake said in a speech on the Senate Floor.

“The impulses underlying the dissemination of such untruths are not benign. They have the effect of eroding trust in our vital institutions and conditioning the public to no longer trust them. The destructive effect of this kind of behavior on our democracy cannot be overstated. Flake went on to compare Trump to infamous Russian leader Josef Stalin.

“The enemy of the people,” was what the president of the United States called the free press in 2017,” Flake said. “It is a testament to the condition of our democracy that our own president uses words infamously spoken by Josef Stalin to describe his enemies.”

Flake says the president is spreading an “untruth” by continuing to criticize Special Counsel Robert Mueller’s investigation into Russian meddling as a “hoax.”

“To be very clear, to call the Russia matter a “hoax” – as the president has many times – is a falsehood. We know that the attacks orchestrated by the Russian government during the election were real and constitute a grave threat to both American sovereignty and to our national security. It is in the interest of every American to get to the bottom of this matter, wherever the investigation leads,” says Flake.

“A free press usually corrects itself when its made a mistake, politicians don’t,” says Flake. He calls on Congress to not “turn a blind eye to assaults” on the institution of journalism and the press.