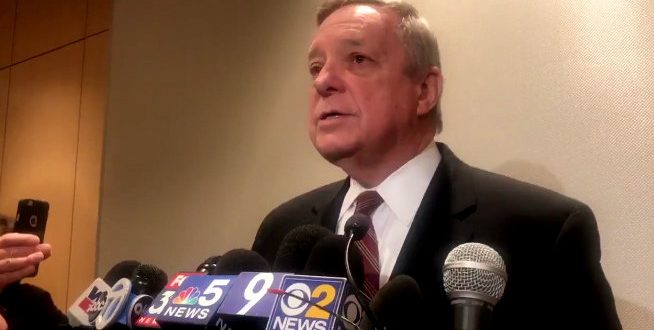 Sen. Dick Durbin: I Was There, Trump Said “Shithole”

Sen. Dick Durbin (D-Ill.) fired back at President Trump for denying that he called Haiti and African countries “shithole countries,” saying Trump’s denials are “not true.”

“In the course of his comments, [Trump] said things that were hate-filled, vile and racist,” Durbin told reporters on Friday. “I cannot believe in this history of the White House, in that Oval Office, any president has ever spoken the words that I personally heard our president speak yesterday.”

Durbin was one of several lawmakers in the meeting during which Trump referred to Haiti and African nations as “shithole countries,” according to The Washington Post.

BREAKING: Democrat Sen. Durbin, who was in meeting with Pres. Trump: “He said these hate-filled things.” https://t.co/yUHQuZIOCm pic.twitter.com/s9fMhtcguR

Sen. Dick Durbin says, #RacistTrump is lying and every single awful press account regarding those hateful vile remarks Trump uttered regarding Haiti & Africa are accurate. Can’t say I thought differently. Kuddos to the UN for saying Trump is a racist! SAD! pic.twitter.com/9XAwikdmXb