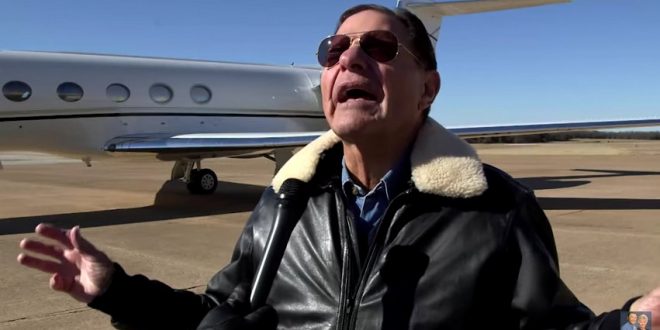 In 2016, DeadState published a story featuring evangelical ministers Kenneth Copeland and Jesse Duplantis having a discussion about how they talk to God regularly while on private jets — conversations that would be impossible while riding in coach.

The two sat at table when at one point Copeland declared that private jets “are sanctuary that protect the anointed,” adding that commercial airline travel was impossible for preachers in a “dope filled world” and that riding coach was like “getting in a long tube with a bunch of demons.”

Now, Copeland’s dreams of conversations with God via corporate air travel have been realized. As The Friendly Atheist points out, he just purchased a “debt free” Gulfstream V from media mogul Tyler Perry. “Are you seeing this?” Copeland says in a video documenting the jet’s arrival. “I hope so! You bought it! You and Jesus!” he exclaimed to his followers.

First, the Holy Spirit confirmed to Brother Copeland that the Gulfstream V was the plane the Lord had set aside for KCM.   Soon a contract was signed, a cash deposit was paid, and the aircraft was brought to Dallas for a very thorough pre-buy inspection process, which has wrapped up in November. And praise God, it was actually during THANKSGIVING week that the purchase was completed, the title was signed, and thanks to the CX Team, the cash was in the bank to mark it paid in full! Hallelujah, it’s done!

But our work as the Elite CX Team is not done. Overall, this Gulfstream V is in outstanding condition and is an exceptional value; however, before it goes into regular service for KCM, we want to upgrade the avionics to meet new standards the FAA will require in the near future.

We also need to reconfigure the interior to better serve KCM’s needs for international flights. In the next few weeks, the avionics and interior work will commence. The cost of these upgrades is approximately $2.5 million. So, as Elite CX Team members, we need to set our faith NOW on receiving that additional seed so that we can sow it within the next three to four months, as the upgrades are completed.

VIDEO: As DeadState observes, Copeland is positively “giddy” as he thanks Jesus that he no longer has fly in a tube of demons.
(Tipped by JMG reader Brody)