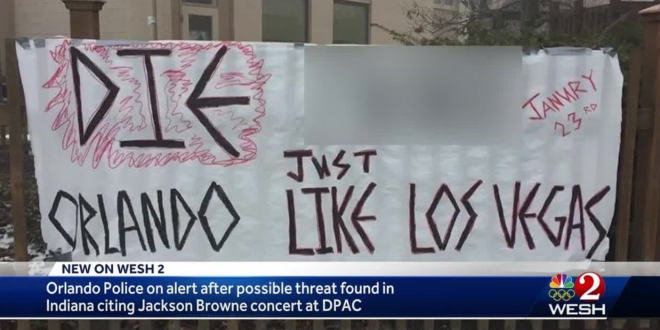 Orlando police said they will have an increased presence for Tuesday night’s Jackson Browne concert at the Dr. Phillips Center for the Performing Arts after a possible threat. Police in West Lafayette, Ind., began investigating Sunday after a banner was left at a Unitarian Universalist Church that hosted a protest to mark the one-year anniversary of the inauguration of President Donald Trump.

The banner — which includes vulgar language and misspellings — says “Die [expletive], Orlando just like Los Vegas” with “Janury 23rd” in red letters. Another banner left at the church names Browne and includes racial and anti-gay slurs.

“OPD is aware of this incident and has been in communication with police in West Lafayette, Indiana,” Orlando police said in a statement. “We are aware that there is a planned Jackson Browne concert Jan. 23 at the Dr. Phillips Center and there will be an increased security presence at the event.” A spokeswoman for the center said it learned about the situation on Sunday and has been working with police to ensure the safety of the concert.