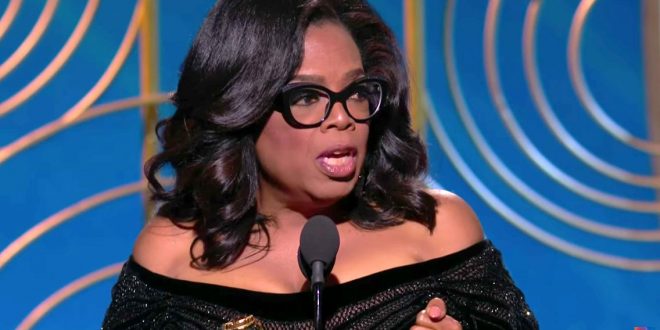 Oprah Winfrey for president was something of a running theme throughout the Golden Globes on Sunday, beginning with Seth Meyers’ opening monologue. He jokingly forbade Winfrey from considering the presidency. But the trend picked up steam as the night unfolded, particularly after Winfrey’s impassioned acceptance speech for the Cecil B. DeMille Award.

It didn’t take long for social media, and celebs in particular, to rally Winfrey for the job, including inside the ceremony. “It’s up to the people,” Winfrey’s longtime partner, Stedman Graham, told The Times. “She would absolutely do it.”

Switched back to the Golden Globes to watch Oprah get her award. Never let it be said that I don’t respect the president of the United States.

When Oprah is speaking at the Golden Globes and your goals shift to VP… pic.twitter.com/3ghEVMmCwF

Oprah shades her 2020 opponent: “It’s the insatiable dedication to uncovering the absolute truth that keeps us from turning a blind eye to corruption and to injustice. To tyrants and victims, to secrets and lies.” #GoldenGlobes

Previous Todd Starnes: Liberals Are The True Racists Because They Hate That Blacks Are Getting Jobs Under Trump
Next REPORT: Trump’s Secret Shrinking Daily Schedule