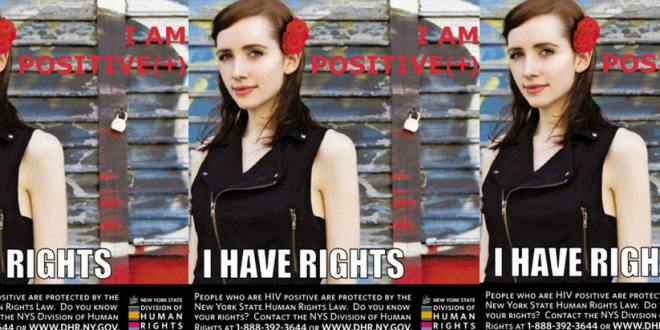 A Brooklyn woman’s lawsuit against the state for using her photo in an ad promoting the rights of HIV-positive people can proceed — because society has yet to fully accept people who have the virus, an appeals court ruled Tuesday.

Avril Nolan — who does not have HIV — sued the state’s Division of Human Rights in 2013 for $1.5 million, alleging it had improperly used her photo obtained through Getty Images in an advertisement.

“I am positive, I have rights,” the ad read, alongside a picture of Nolan. It ran in three newspapers and on three websites. The decision by the Appellate Division First Department, which found HIV “continues to be a significant stigma,” is the first of its kind in the country regarding a defamatory statement about the disease.

The state had argued that the public’s “acceptance” of high-profile HIV+ persons like Charlie Sheen and Magic Johnson proves that HIV is no longer considered a shameful condition.

Getty Images has already reached a confidential settlement with the woman. Getty’s licensing agreement stipulates that their images may not be used in a way that could be considered “unflattering or controversial to a reasonable person.”

Brooklyn woman depicted as HIV-positive in an ad may proceed with a suit against the state as a court cites the disease’s ongoing “stigma” https://t.co/wq0DSSGPlb pic.twitter.com/LWxZP7jb5y