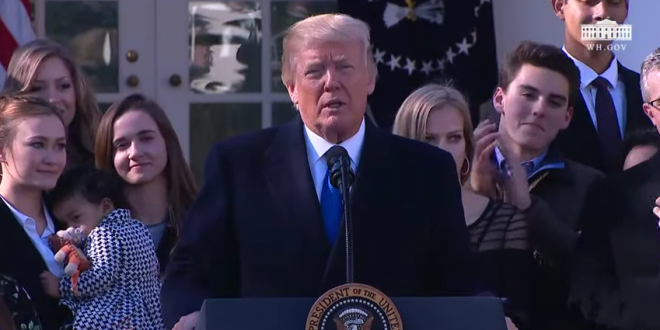 Donald Trump will become the third sitting U.S. president to address anti-abortion activists at the annual March for Life on Friday, highlighting his shift in recent years from a supporter of women’s access to abortion to a powerful opponent.

Trump is due to address the march in Washington via satellite from the White House Rose Garden on Friday afternoon. Ronald Reagan, Trump’s fellow Republican, made supportive remarks to the march in 1987 via telephone, while George W. Bush, another Republican, twice did the same, in 2003 and 2004.

Trump was previously a supporter of women’s access to abortion, saying in an interview in 1999, when he was still a celebrity real-estate tycoon in New York City, that while he “hated the concept of abortion” he was “very pro-choice.”

RELATED: March For Life Assistant Director Bethany Goodman is married to Wes Goodman, the former Ohio state rep who resigned late last year after being caught screwing a dude in his office. The Family Research Council, which has a contingent at today’s march, once held a campaign fundraiser for Goodman after which he allegedly sexually assaulted a young man in his hotel room. FRC president Tony Perkins reportedly learned of the assault but did nothing.