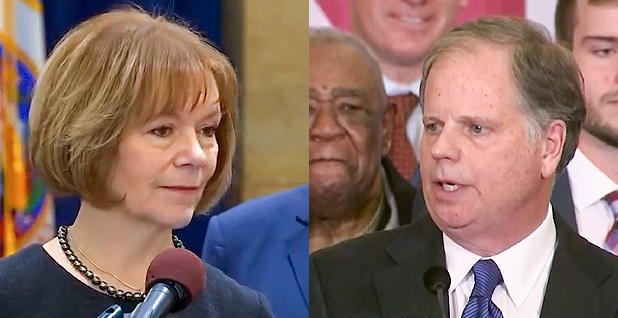 Former Vice President Joe Biden will escort Sen.-elect Doug Jones (D-AL) to his swearing-in ceremony on Wednesday morning, according to CNN and local reports from Alabama. While the state colleague typically accompanies a new senator to the swearing-in ceremony, Jones did not ask Sen. Richard Shelby (R-AL) to attend, AL.com and WAAY TV reported Tuesday evening. Jones’ ceremony is scheduled for noon on Wednesday and he plans to do his swearing-in on a personal family Bible, according to AL.com.

Tina Smith, who served three years as Minnesota’s lieutenant governor and worked behind the scenes as an influential DFLer for years before that, will join the U.S. Senate on Wednesday. Smith’s rapid elevation to the Senate follows the resignation of former Sen. Al Franken, who stepped down a day earlier following sexual harassment allegations. Smith, 59, will become Minnesota’s junior senator alongside Sen. Amy Klobuchar, also a DFLer. That will make Minnesota just the fourth state to currently have two women as U.S. senators.

Smith will become the 22nd female sitting member of the Senate, a new record. The balance in the Senate will narrow slightly today to 51-49.

Previous Homocon Drudge Rips Into “Schizophrenic” Bannon
Next Huckabee On Trump’s Nuclear Threats: People Only Care About Him Putting Money In Their Pockets [VIDEO]