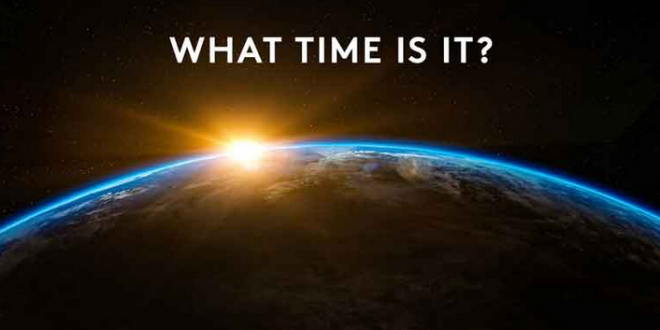 Alexa, what time is the apocalypse? Ulp. The Bulletin of the Atomic Scientists advanced the symbolic Doomsday Clock a notch closer to the end of humanity on Thursday, moving it ahead by 30 seconds. It is now set at two minutes to “midnight.”

In moving the clock 30 seconds closer to the hour of the apocalypse, the Bulletin of the Atomic Scientists cited “the failure of President Trump and other world leaders to deal with looming threats of nuclear war and climate change.”

The organization now believes “the world is not only more dangerous now than it was a year ago; it is as threatening as it has been since World War II,” Bulletin officials Lawrence M. Krauss and Robert Rosner wrote in an op-ed published Thursday by The Washington Post.

“In fact, the Doomsday Clock is as close to midnight today as it was in 1953, when Cold War fears perhaps reached their highest levels.”

Today: Will the #DoomsdayClock be set forward or backward or remain at two and a half minutes to midnight? Watch the announcement live on Facebook or at https://t.co/gy8E1l1dQA (15:00GMT/16:00ECET) pic.twitter.com/c17XCfS9bw

The Doomsday Clock, which symbolises the current threat of global annihilation, could move the closest it has ever come to midnight following a year of growing tensions between North Korea and Donald Trumphttps://t.co/2HGY8JsQFT pic.twitter.com/Xrfh6v3ZVB