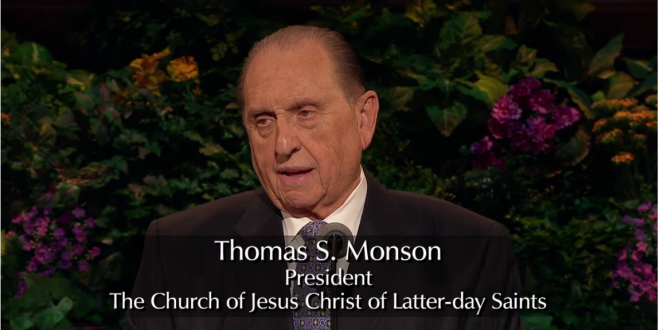 Thomas S. Monson, the 16th president of the Mormon church, has died after overseeing the religion for nine years. He was 90. Monson died Tuesday night at his home in Salt Lake City, according to church spokesman Eric Hawkins. Monson spent more than five decades serving in top church leadership councils — making him a well-known face and personality to multiple generations of Mormons.

Monson’s presidency was marked by his noticeably low profile during a time of intense publicity for the church, including the 2008 and 2012 campaigns of Mormon Mitt Romney for President. Monson’s most public acts were appearances at church conferences and devotionals as well as dedications of church temples.

Monson will also be remembered for his emphasis on humanitarian work; leading the faith’s involvement in the passage of gay marriage ban in California in 2008; continuing the religion’s push to be more transparent about its past; and lowering the minimum age for missionaries.

Four months before California voters headed to the polls to decide the fate of Proposition 8, the Church of Latter-day Saints put out a call for help. A letter from church President Thomas Monson was read at every ward in California. It told members to “do all you can to support the proposed constitutional amendment by donating of your means and time.”

Organization meetings broke out across the state, but the leaders wanted more. Additional letters were sent to every church, with titles such as “Thirty People in Each Ward” and “More than Four Hours per Week.”

Donations from individual Mormons poured in and Mormons hit the streets, going door to door, hanging up signs, campaigning against the measure through phone banks. Funding was used for everything from newspaper ads to television commercials.

That push from the Mormon church is widely credited as helping propel Proposition 8, which defined marriage only as a union between a man and a woman, to victory in November 2008.