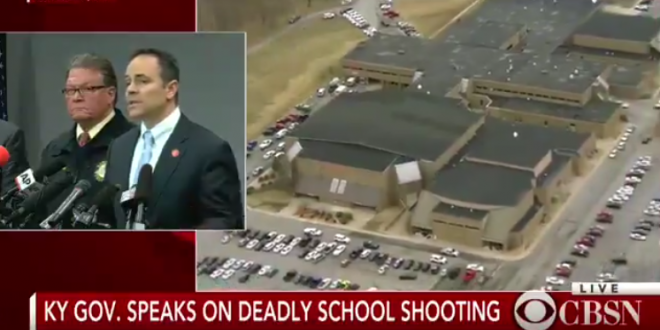 An update on this morning’s mass shooting:

A shooting Tuesday at a rural high school in Kentucky left two students dead and 19 others injured, 14 from gunshot wounds, Gov. Matt Bevin said during an early-afternoon news conference. The gunman was a 15-year-old boy, authorities said during a news conference early Tuesday afternoon.

U.S. Sen. Mitch McConnell, R-Ky., said he’s sending prayers of comfort and healing to those affected by the shooting. Speaking on the floor of the U.S. Senate, McConnell says his staff in western Kentucky is at Marshall County High School and is in close contact with local officials.

A statement from Gov. Bevin regarding this morning’s events in Marshall County: pic.twitter.com/0n0cxgJkvi