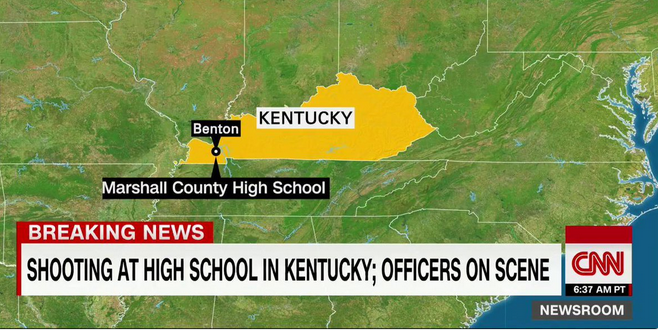 Officials are on scene of a reported school shooting in southwestern Kentucky, and the school is currently on lock down. Crews are at the scene at Marshall County High School in Benton, Kentucky, according to NBC affiliate WPSD. The station reports there is a heavy police presence and multiple ambulances on the scene.

The Benton, Kentucky City Clerk told NBC4 sister station WKRN that several injuries have been reported in connection with the shooting. Detective Jody Cash with the Kentucky State Police said the “situation is no longer active.”

Tragic shooting at Marshall County HS…Shooter is in custody, one confirmed fatality, multiple others wounded…Much yet unknown…Please do not speculate or spread hearsay…Let’s let the first responders do their job and be grateful that they are there to do it for us…

DEVELOPING: At least 5 students have reportedly been shot at a Kentucky high school; shooter has been apprehended https://t.co/N3QD9FJxLC pic.twitter.com/p9cKACx9bl