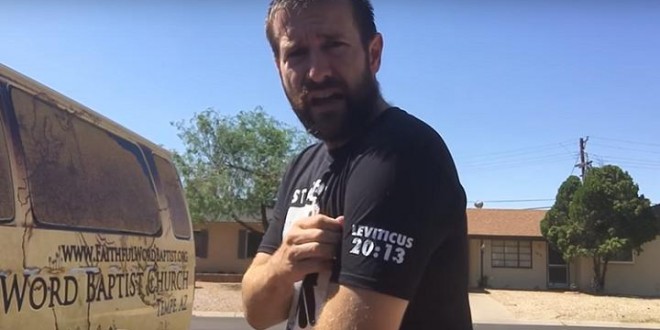 Jamaica has banned a Holocaust-denying pastor from Arizona who has called for gay people to be stoned death, after outcry from activists on the island.

Steven Anderson, from the Faithful World Baptist Church in Tempe, said he was about to board a flight to Kingston when he was informed he would not be allowed into Jamaica.

Anderson, who once prayed for the death of Barack Obama, has previously been denied entry to South Africa, Canada, the United Kingdom and Botswana.

“The decision was made by the chief immigration officer because the pastor’s statements are not conducive to the current climate,” said spokesperson for the Ministry of National Security on Monday.

You may recall that Anderson was among multiple Christian pastors who celebrated the Pulse massacre. Anderson also prayed on camera for those wounded at Pulse to die of their injuries.

VIDEO: According to Anderson, he was denied boarding his Jamaica-bound flight when he attempted to connect in Atlanta. He also laments that he’s been banned from “the most homophobic nation” on the planet.