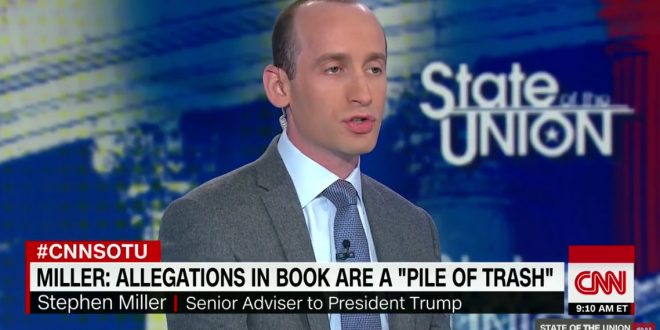 Miller on CNN’s “State of the Union” said former White House chief strategist Steve Bannon, who Wolff quoted criticizing Donald Trump Jr. for meeting with a Russian lawyer in June 2016, was “vindictive” and “out of touch with reality.”

“You get 24 hours of negative anti-Trump hysterical coverage on this network,” Miller said. “I think the viewers right now can ascertain who is being hysterical,” Tapper replied.

And with that, Tapper ended the interview. But watch the clips below. Oh brother.

Previous Michael Wolff: I Hear Trump Is Bouncing Off The Walls
Next Trump: I Have The Same Problem Reagan Did