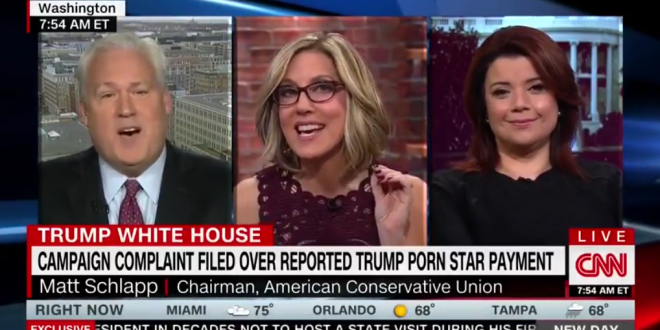 “I don’t really have many thoughts on this Alisyn,” Schlapp said. “They’re basing this on a publication that is kind of like TMZ, a gossip publication.”

“Matt, so conservatives don’t care anymore about extramarital affairs?” an exceedingly patient Camerota asked. Schlapp dodged that question, invoking Bill Clinton’s sex scandal, before shouting at his CNN host: “But you literally want to delve into the sex lives of everyone in politics, I do not!”

“You don’t care,” Camerota noted. “You don’t care anymore about a candidate’s extramarital affairs. You don’t want to talk about it anymore. How convenient.” Schlapp contended that there are simply too many policy questions to discuss to have time to fit in a conversation on Trump’s affairs.

Schlapp is the chairman of the group that puts on the extremist CPAC convention.