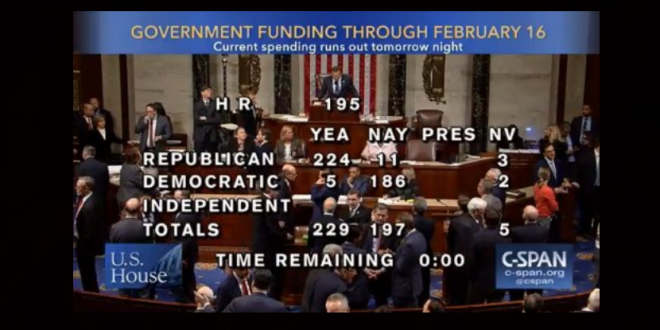 A government shutdown still looms even as the House passed a four-week stopgap funding bill Thursday evening, sending the measure to the Senate, where prospects for its passage remain grim.

House Republicans put up the needed votes to pass the continuing resolution before a few Democrats added their “yes” votes, for a final tally of 230-197. A senior Senate Democratic aide said the House support for the CR does not change the caucus’s position to vote against it in the Senate.

Up until around 6 p.m. Thursday the House also did not have the votes needed to pass the CR, but reluctant Republicans got on board after House GOP leaders negotiated a deal with Freedom Caucus leaders Mark Meadows and Jim Jordan for upcoming votes on defense spending and immigration.