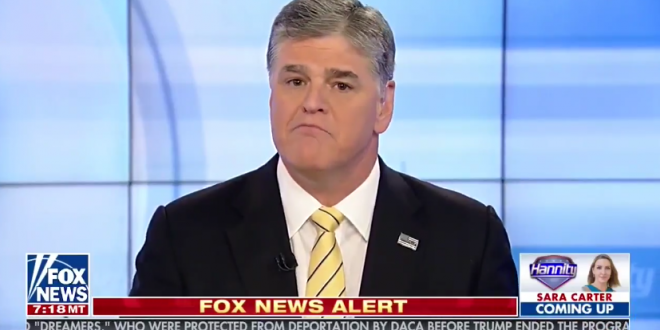 “They’re trying to change the story,” Hannity said, referring to The Times’s report. “At this hour, The New York Times is trying to distract you.”

“And our sources, and I’ve checked in with many of them, they’re not confirming that tonight,” Hannity continued. “And the president’s attorney dismissed the story, and says, ‘Nope, no comment. We’re not going there.’ And how many times has The New York Times and others gotten it wrong.”

As you’ll see below, minutes later Hannity is forced to admit that Fox News sources had confirmed the New York Times report. He then immediately cuts to a police chase. Yup.

Sean Hannity: The New York Times is trying to distract you. They say Trump tried to fire Mueller, but our sources aren’t confirming that!

the seamless and quick transition to the high-speed chase is impressive, you have to admit

Liberal media sheep shocked @realDonaldTrump thought about firing Corrupt Mueller and his liberal team of Hillary lovers, which HE DID NOT DO! They have NO CLUE about what’s coming. Tick tock, tick tock….Stay tuned Irredeemable deplorables. Best Sean