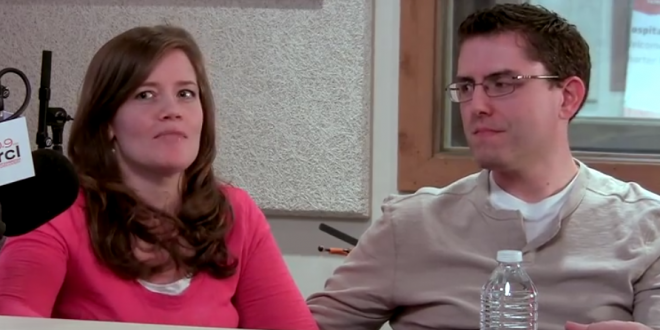 Josh and Lolly Weed, viewed as proof, and used as an example, that a gay man and a straight woman can make a successful Mormon marriage, have announced their divorce. And in the same blog post where they announce their divorce, they offered an apology to the LGBTQ community.

“Today, we need to let you know that Lolly and I are divorcing,” the blog said this week, after recounting the couple’s accidental rise to the media spotlight when Josh Weed came out as a gay LDS man who was faithful to his church and married to a woman. They were in high demand to explain how they made the seemingly contradictory lifestyles work together.

The couple wrote, together and then individually in the same blog post on Thursday, that they came to understand over time that their deep platonic love was not a substitute for romantic love and that such a relationship is vital to everyone’s happiness.

Longtime JMG readers might recall my multiple posts about Josh Weed starting in 2012 when he was first exposed as an ex-gay torture therapist and not, as he’d presented himself, just a gay guy trying to fuck women for Jesus. (See his online profile from the time below.)

In 2015 Weed’s claim that he was a happily opposite-married gay man with a “robust sex life” with his wife was cited in an anti-Obergefell Supreme Court brief filed under the title “Same-Sex Attracted Men And Their Wives In Support Of Respondents.” (The respondents were the states of Kentucky, Ohio, Michigan, and Tennessee.) It’s not clear if Weed’s marriage was cited in the brief at his request.

Anyway if you want to read the Weeds’ million-word apology to the LGBT community, here it is.