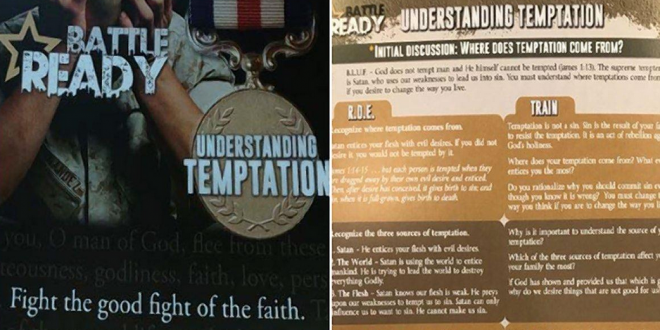 A gay couple is suing a printing company for sending them pamphlets about weakness of the flesh and “temptation” instead of the colorful customized wedding programs they ordered.

On the eve of their wedding day, Stephen Heasley and Andrew Borg, an Australian couple who were married last year in Pennsylvania, opened a package from Vistaprint and were horrified to find 80 copies of a pamphlet entitled, “Understanding Temptation: Fight the good fight of the faith.

“Satan entices your flesh with evil desires” and sin is the result of your failure to resist the temptation,” the pamphlet read. “It is an act of rebellion against God’s holiness.”

The plaintiffs, Aussies Stephen Heasley and Andrew Borg — who married at a hillside ceremony in Butler County, Pa., in September — added in a statement, “Our goal is to hold Vistaprint accountable for the harm they have caused … and to send a message that there will be consequences for acts of hate perpetrated against others.”

Heasley, 39, and Borg, 31, had ordered 100 blue and gold programs for $79.49 that included the lyrics to their processional song, “Treasure” by Above and Beyond. They had gotten engaged on the same day they saw the English electronic-dance music group perform “Treasure.”

“Vistaprint would never discriminate against customers for their sexual orientation. We pride ourselves on being a company that celebrates diversity and enables customers all over the world to customize products for their special events,” a company spokesperson said in a statement.