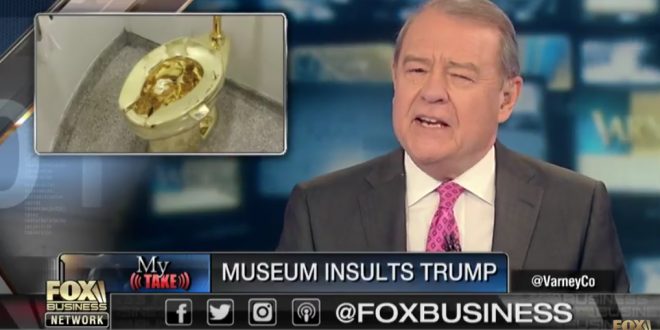 Fox Host Melts Down Over Guggenheim’s Toilet Offer To Trump, Demands Resignation Of Their Curator [VIDEO]

Fox Business host Stuart Varney, who last appeared on JMG when he declared that he’ll probably tip food servers less if their minimum wage goes up, is ever so pissed at the Guggenheim for offering the White House a literally gold toilet instead of the requested Van Gogh painting.

Varney proceeded to call for the resignation of Guggenheim curator Nancy Spector, and he ranted and raved about how the incident shows the absolute contempt “New York elites” have for Trump.

Stuart Varney, of course, is a loaded British guy from Derbyshire who now works in Midtown Manhattan. So he might want to be a bit more specific about which horrible, nasty, terrible “elites” he’s talking about in the future.