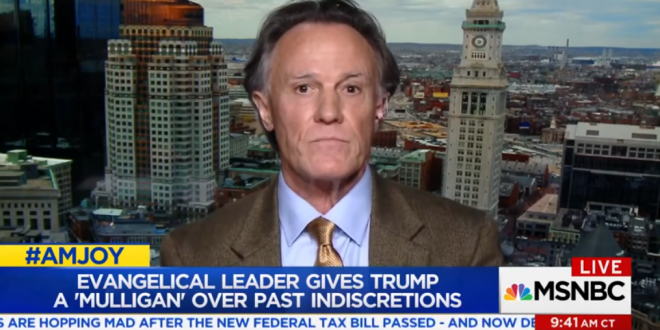 “Tony Perkins forgot his own theology and replaced it with a theology of revenge on people he disagrees with politically. That’s what’s going on here. This is the revenge of white evangelical right-wingers. Who they want to punch in the mouth is not just black Americans but, to put it in the words of the President of the United States, those who live in shithole countries.

“So they’re willing to put up with anything when it comes to moral degradation to see those ends achieved. I’m glad he put it in terms of revenge, at least he misspoke from his point of view but told the truth.” – Former evangelist Frank Schaeffer, responding to Perkins saying that the Christian right is thrilled that Trump is taking revenge on their behalf. Watch the clip, you’ll like this guy.

.@FRANK_SCHAEFFER: What we’re now watching as an appendage of the #Trump presidency is one of the greatest downfalls of a religious order we’ve ever known… The evangelicals have actually become the instigators of evil themselves… #AMJoy pic.twitter.com/mSy283QD34