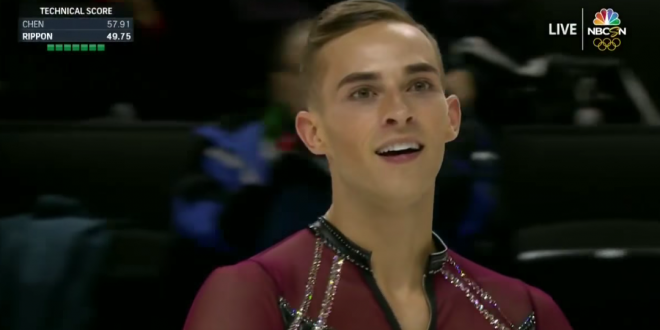 As of Sunday morning, 28-year-old figure skater Adam Rippon will be the first openly gay man to compete for the United States in the Winter Olympics. Despite a disappointing fourth-place performance at the U.S. figure skating championships Saturday night, Rippon was selected to join Nathan Chen and Vincent Zhou in Pyeongchang next month.

“I’m really grateful that the selection committee looked at my body of work over the last two seasons,” Rippon told reporters on Sunday.

Rippon had entered that free skate a clean performance away from his first Olympic Games, one year after breaking his foot, four years after nearly quitting figure skating altogether — and 82 years after the last American man his age made an Olympic skating debut.

Then he fell on his opening jump, turned two triples into singles and stood wide-eyed in the terrifying aftermath. After a decade spent on the painful Olympic periphery, his best chance seemed to disintegrate in 4½ disappointing minutes.

Then — with Wagner, his mother and others there for congratulations or consolation — came the text. The committee had voted 11-1 to place Rippon on the Olympic team instead of surprise silver medalist Ross Miner, who had a less impressive international track record. U.S. champion Nathan Chen and bronze medalist Vincent Zhou, the two most quad-laden Americans, were near-givens for the team. Rippon, one of the longest-standing remnants of a more artistic era, had not been.

RELATED: Per Wikipedia, at the 2014 Winter Olympics seven openly gay women competed for other countries.