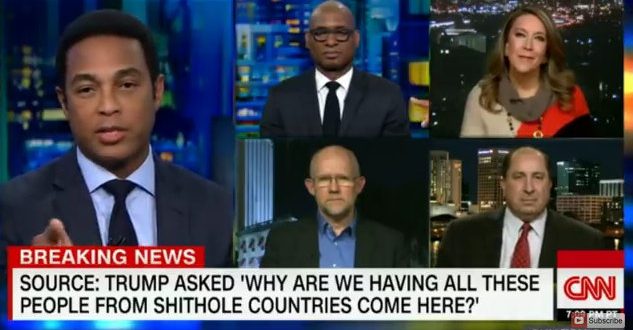 CNN’s Don Lemon let rip on President Donald Trump Thursday night, after a report claimed he referred to Haiti, El Salvador and African countries as “shithole countries.” Lemon — who just last month was himself attacked by Trump on Twitter—opened Thursday’s CNN Tonight: “The President of the United States is racist.”

Later, during a heated panel discussion on Trump’s remarks, Lemon grew incensed by John Fredericks, Trump’s former presidential campaign co-chair in Virginia, who tried to claim that the issue wasn’t race, or Trump’s apparent bigotry, but a matter of economics.

Fredericks told Lemon that making it a race issue was “easy and lazy.” That is when Lemon decided to pull the plug on Fredericks. “Can we cut him off? Can we take him off the screen?”

Don Lemon’s playing no games in 2018. Racists gets called out on live television. pic.twitter.com/ZpIeAAwwV9

Maybe I could take the Left’s righteous indignation seriously if they did not defecate on police cars and parade in public wearing vagina hats. #ToddStarnesShow