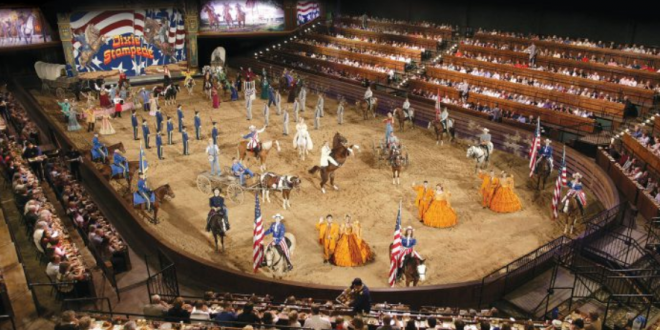 Dolly Parton’s Pigeon Forge dinner attraction, Dixie Stampede, has a new name. It’s now known as Dolly Parton’s Stampede, according to a news release from World Choice Investments. It also has a location in Branson, Missouri. Parton explained in the press release that the change streamlines the name of the show, will remove any confusion or concern about it, and will help efforts to bring the show into new cities.

“Our shows currently are identified by where they are located,” Parton said in the news release. “Some examples are Smoky Mountain Adventures or Dixie Stampede. We also recognize that attitudes change and feel that by streamlining the names of our shows, it will remove any confusion or concerns about our shows and will help our efforts to expand into new cities.”

Knox County Mayor Tim Burchett said he was disappointed that the show yielded to political correctness. “Well, like everybody else, I love Dolly, and I love all that she’s done for our community, which is her community, and I’m disappointed that they’re yielding to political correctness,” Burchett said. “What’s next? Are we going to change the name of Dixie cups and the Dixie sugar company? You know, I just hope they don’t change their Christmas program.”

Stand by for Todd Starnes to set his hair on fire. Other right wingers are already wailing in predictable fashion.

Dolly Parton has officially allowed liberals to beat her down! Her restaurant that has been in business for 30 years is changing the name from DIXIE Stampede to just Dolly Parton Stampede! I thought she was good ole Southern Girl! #dollyparton pic.twitter.com/JfTd5HDZSV

Get a backbone and keep the name Dixie , never going back now, since you’re giving into one person complaining about a name that’s not racist . Love ya Dolly but this will be the end to that show,gonna let one person bring the DIXIE Stampede to close because of NO backbone, SAD !

Dolly Parton drops the name “Dixie” because it not PC. Very disappointed in her. I guess Dixie Cups isn’t PC. Should people named “Dixie” be shunned until they change their name? #DollyParton I’m just saying. This may backfire #Dolly.

@DollyParton don’t let the libs do this to your heritage!!! Don’t let them shame the heart of Dixie! https://t.co/7EEquWBxSP