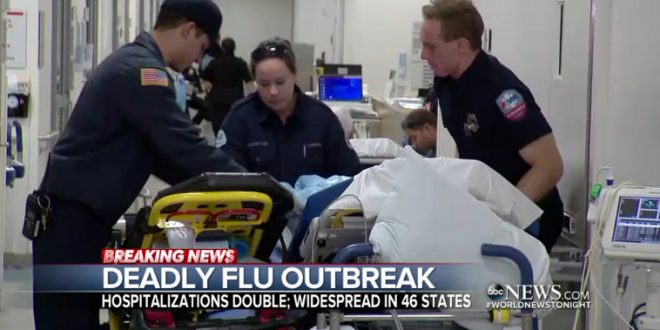 A particularly deadly flu virus has reportedly become widespread in 46 states across the country, according to the recent data from the U.S. Centers for Disease Control and Prevention. “This is a feature of this year’s flu — not only did it start early, but it seemed to occur all over the country more or less simultaneously,” Dr. William Schaffner, an infectious disease specialist at Vanderbilt University, told ABC News.

According to data released last week from the CDC, the deadly virus has yet to reach “epidemic” proportions, but it could soon. A flu outbreak can become an epidemic when the number of deaths resulting from the virus exceeds a percentage set by the CDC using data from previous years. However, this week’s number of deaths has reportedly placed the country at just 0.2 percent below that threshold.

The virus appears to be hitting California particularly hard. According to the Associated Press, at least 27 deaths of people under 65 have been linked to the flu. State hospitals are also reportedly beginning to run out of the anti-viral medication used to treat the illness, Tamiflu.