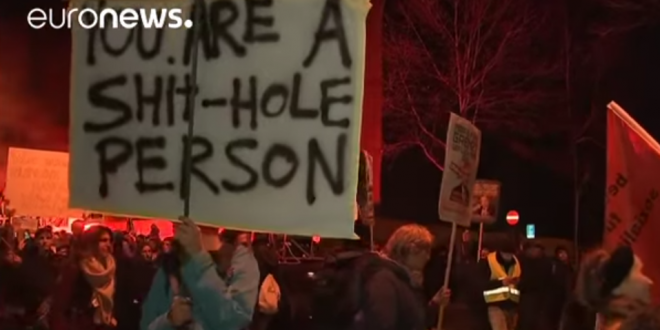 More than a thousand people protested in central Zurich on Tuesday against the planned arrival of US President Donald Trump in Switzerland for the World Economic Forum (WEF). Trump is due to make a speech at the gathering of international business and political leaders in Davos on Friday.

The demonstrators marched through the Swiss city chanting “Trump not welcome”, with some carrying banners and placards reading “dump the Trump” and “Switzerland is hosting Nazis”, an AFP reporter said, putting the turnout at over 1,000.

“We are protesting against both Trump and the WEF. The discussions between the richest one percent of the world and a man who fuels an aggressive atmosphere towards women and minorities has no place in Switzerland,” said Tamara Funiciello, president of Young Socialists of Switzerland.

Protests in Switzerland against Trump’s visit to Davos https://t.co/3w8NYal9UA pic.twitter.com/X2QsZalq6l

Despite heavy security and prohibition of any kind of protest in#Davos, some managed to get message out against #WEF and #Trump pic.twitter.com/KvA3ZZPoeA

Heavy snow is burying the venue at this year’s World Economic Forum, leaving questions about how President Trump will get into town https://t.co/goFQSyX1LM #WEF18 pic.twitter.com/DLo6TMdi43

Previous Perkins Defends Giving Trump A “Mulligan” On Adultery: Evangelicals Understand Second Chances [VIDEO]
Next Michael Steele On Tony Perkins’ Hypocrisy: Shut The Hell Up And Don’t Ever Preach To Me Again [VIDEO]