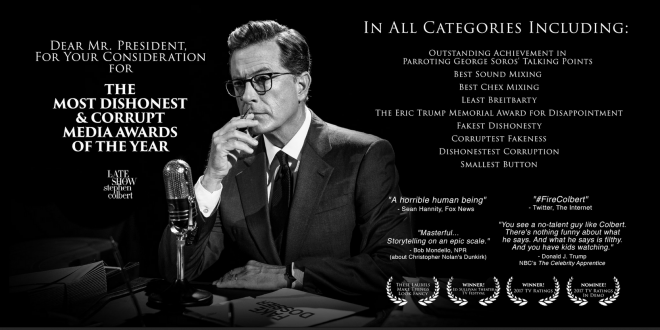 Stephen Colbert took the opportunity on Wednesday night’s episode of “The Late Show” to unveil his bid for Trump’s “Dishonest & Corrupt Media Awards,” which the president announced in a tweet Tuesday. “Or, as we call ’em in the biz, the Fakies,” Colbert quipped. “Because nothing gives you more credibility than Donald Trump calling you a liar, and I, of course, don’t want to get snubbed.”

Colbert went on to explain that he had placed a billboard in Times Square — “the failing New York Times Square” — announcing his candidacy in all categories, including “Outstanding Achievement in Parroting George Soros’ Talking Points,” “The Eric Trump Memorial Award for Disappointment,” and “Smallest Button” — a jab at Trump’s recent tweet aimed at Kim Jong Un in which he claimed to have a larger nuclear button than the North Korean leader.

I will be announcing THE MOST DISHONEST & CORRUPT MEDIA AWARDS OF THE YEAR on Monday at 5:00 o’clock. Subjects will cover Dishonesty & Bad Reporting in various categories from the Fake News Media. Stay tuned!

So excited for Monday’s “MOST DISHONEST & CORRUPT MEDIA AWARDS OF THE YEAR!” See you on the red carpet, @AndersonCooper! #TheFakies pic.twitter.com/r8pYCj0g9r

Tonight! My desperate bid to get Trump’s disapproval! #TheFakies pic.twitter.com/7exZSesI8m Previous Trump Threatens To Sue Steve Bannon For Defamation
Next REPORT: Even More Dirt From Inside The White House