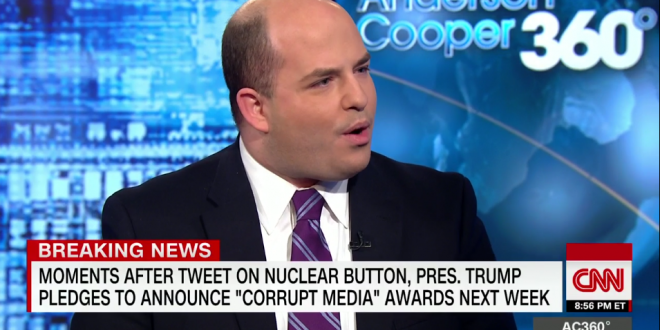 CNN’s Brian Stelter said if President Trump were the leader of another country such as Germany or China, people would say his tweets were “messages from a person who is not well.”

During an appearance on CNN, Stelter said some of the tweets Trump sent out Tuesday were “deeply disturbing.”

He said when Trump was inaugurated last January, some people started to raise concerns about Trump’s mental health and his fitness for office.

“I think we can apply a test to his 16 tweets today. The test would be if this were the leader of… Germany or China or Brazil — what would we say? How would we cover these tweets?” he asked.

“We would say these are the messages from a person who is not well, from a leader who is not fit for office.”