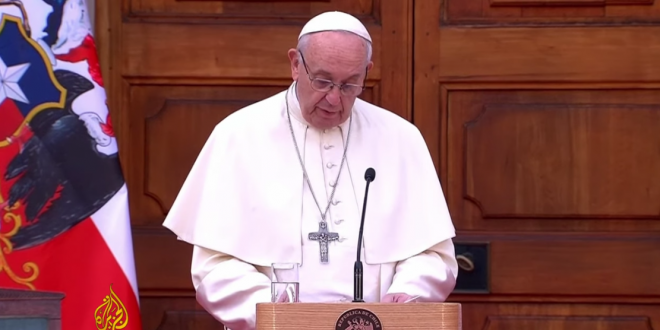 Pope Francis dove head first into the sex abuse scandal that has devastated the Catholic Church’s credibility in Chile, apologizing Tuesday for the “irreparable damage” to victims, but also acknowledging the “pain” of priests who have been held collectively responsible for the crimes of a few.

Francis’ words were delivered amid unprecedented opposition to his visit: Three more churches were torched overnight, including one burned to the ground in the southern Araucania region where Francis celebrates Mass on Wednesday. Police used tear gas and water cannons to break up an anti-pope protest outside Francis’ big open-air Mass in the capital, Santiago.

Speaking from the presidential La Moneda palace, Francis told Chilean President Michelle Bachelet, lawmakers, judges and other authorities that he felt “bound to express my pain and shame” that some of Chile’s clergy had sexually abused children in their care.

Francis did not refer by name to Chile’s most notorious pedophile priest, the Rev. Fernando Karadima, who in 2011 was barred from all pastoral duties and sanctioned by the Vatican to a lifetime of “penance and prayer” for sexually molesting minors. Nor did he refer to the fact that the emeritus archbishop of Santiago, a top papal adviser, has acknowledged he knew of complaints against Karadima but didn’t remove him from ministry.