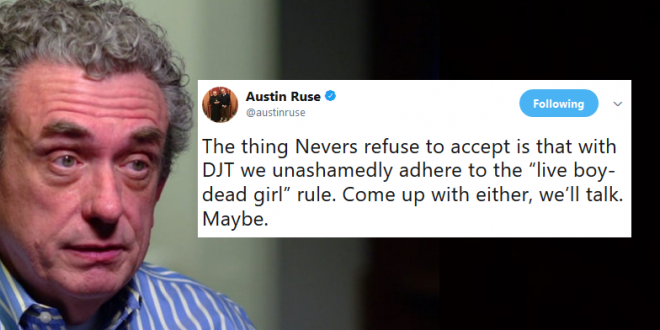 Austin Ruse, president of the Catholic Center for Family and Human Rights (C-FAM), this weekend summed up the hypocritical Christian right’s utter disinterest in Trump’s adultery by referencing the famous quote from former Louisiana Gov. Edwin Edwards, who in 1983 declared, “The only way I can lose this election is if I’m caught in bed with either a dead girl or a live boy.”

Ruse’s disinterest in the still-unfolding Stormy Daniels story is clearly widely-shared in the evangelical world, where the scandal has gotten little attention. This weekend Franklin Graham, perhaps the nation’s most prominent evangelical, shrugged off the story by saying that nobody thinks Trump is “President Perfect.”

The thing Nevers refuse to accept is that with DJT we unashamedly adhere to the “live boy-dead girl” rule. Come up with either, we’ll talk. Maybe.

PREVIOUSLY ON JMG: Austin Ruse issues money beg to stop the “homosexual buccaneers” at JMG. Austin Ruse says JMG readers are controlled by Satan. Austin Ruse gets fired by the American Family Association after a guest-hosting spot on their radio network during which he declared that liberal university officials “should all be taken out and shot.” Austin Ruse claims that a Vatican priest once offered him absolution if he were to murder Hillary Clinton. During a speech at CPAC 2012, Ruse denounced the United Nations for issuing a resolution against the gay death penalty. Ruse is married to FRC “senior fellow” Cathy Ruse.