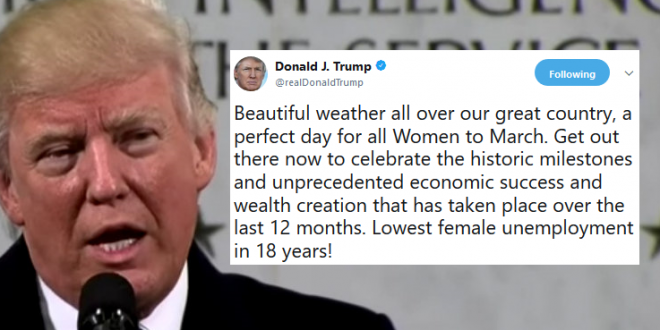 One year after millions of people took to the streets to protest the inauguration of President Donald Trump, activists this weekend are gathering to continue the momentum sparked by the historic Women’s March with new rallies in New York, Washington D.C., Los Angeles, and beyond.

Trump weighed in on the nationwide marches with a trolling tweet that casted the demonstrations as a celebration of his administration’s achievements. In turn, many, including several Democratic lawmakers, poured in on social media to mock the president.

Beautiful weather all over our great country, a perfect day for all Women to March. Get out there now to celebrate the historic milestones and unprecedented economic success and wealth creation that has taken place over the last 12 months. Lowest female unemployment in 18 years!

Who wants to tell him? https://t.co/ZIWZvVkMCO

Instead of working with us to reopen the government and finalize a long-term bipartisan budget deal, President Trump is spending his day crassly heckling women on Twitter. https://t.co/GXkwPj4WAR

Millions of strong women just grabbed you by the pussy.