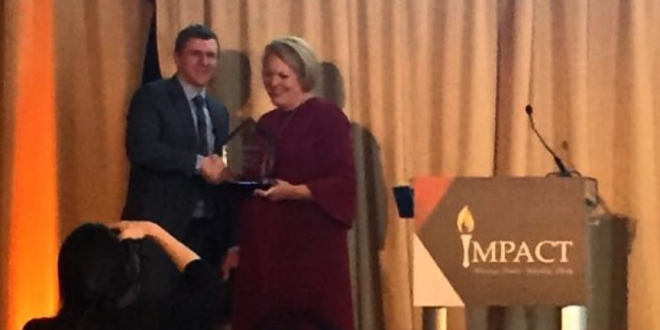 James O’Keefe, the conservative activist who attempted to plant a false story in The Washington Post this month about GOP Senate candidate Roy Moore, was presented Wednesday with an Impact Award handed to him by Ginni Thomas, wife of Supreme Court Justice Clarence Thomas. O’Keefe accepted the award on behalf of his organization, Project Veritas, at an event hosted by the conservative group United for Purpose at the Trump International Hotel in Washington, D.C.

Thomas is a Tea Party activist and president of Liberty Consulting. Project Veritas came under fire in November after The Post revealed that one of the organization’s operatives attempted to plant a false story about Moore, with the intent of undermining the paper’s credibility. The Post had previously published accusations that Moore pursued sexual relationships with girls as young as 14 when he was a district attorney.

At Trump Hotel DC today, Project Veritas’s James O’Keefe cited JFK and Thomas Paine, claimed he was the one being attacked. Watch for yourself: https://t.co/1bXpNdG3mv pic.twitter.com/1wEZM5oKY4

Instagram account that appears to be linked to James O’Keefe shows him accepting an award at the Trump D.C. hotel from Clarence Thomas’s wife, Ginni. pic.twitter.com/vpP6v1fTTT

The office of New York attorney general Eric Schneiderman laid groundwork to revoke the charitable status of the conservative group Project Veritas last week, claiming it had misled the state about its president James O’Keefe’s past criminal conviction.

New: James O’Keefe has neglected to disclose his criminal conviction in charity registration filings in at least five states https://t.co/Ycldhp962l