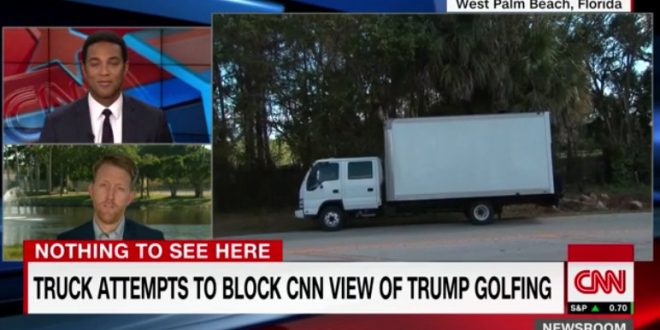 President Donald Trump made news today by making no news at all, putting in a round of golf for the second day in a row after tweeting that it was time to “get back to work.”

Trump’s golf outings have become strangely secretive lately, with reporters being forced to hide in the bushes in order to snag footage of the commander in chief getting his swing on.

Today, the White House is being accused of taking this secrecy to a whole new level, with photojournalists noting a mysterious white truck blocking the way from reporters gaining access to Trump’s golf outing, with The Washington Post’s Paul Farhi noting that the truck seemed to move along with the cameras, with the sole intent of restricting access.

Mysterious white truck blocked TV news crew from getting shots of Trump playing golf in Fla., I’m told. As photojournalist moved the camera, he said, truck moved w/him to block the picture. The unmarked truck parked when Trump was apparently at hole, then drove off after.

“You Can’t See Me” ❌ 👀 A large truck is attempting to block cameras from capturing video of President Donald Trump golfing 🚚 🏌 https://t.co/qeO0k6c4YP pic.twitter.com/YO34DA6MGq