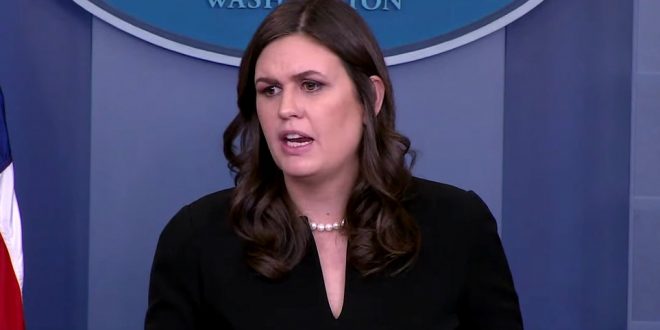 White House: Your Mind Is In The Gutter If You Read Trump’s Attack On Sen. Gillibrand As Sexual [VIDEO]

“There is no way that is sexist at all,” White House press secretary Sarah Huckabee Sanders told reporters. Instead, Sanders said the president was accusing Gillibrand of being “controlled by contributions” and hammering home his pledge to “drain the swamp” in Washington.

The spokesperson said the president does not owe the senator an apology if his words were interpreted to have a sexist meaning. “I think only if your mind is in the gutter you would have read it that way, so no,” she said.

April Ryan's reaction here to the gutter remark is everything. pic.twitter.com/aAJoqx2kMA

WH says Trump doesn't owe Sen. Gillibrand an apology and that Trump's tweet only suggestive 'if your mind is in the gutter' pic.twitter.com/apJqCDmzLg

.@AprilDRyan's face when Sarah Sanders says "only if your mind is in the gutter would you have read" Trump's Gillibrand tweet as containing sexual innuendo pic.twitter.com/lN0ZgYJmWM

@realDonaldTrump said in his tweet "Do Anything!" That is a broad and open statement meaning anything. @presssec says our "minds are in the gutter" if we thought of sexual overtones with the tweet. However we have heard the @realDonaldTrump talk of grabbing the meow-meow!

According to the press secretary for the President of the United States of America, my mind is in the gutter.