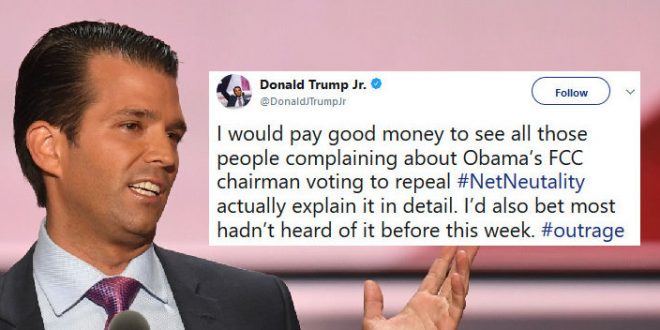 Twitter users pounced on Donald Trump Jr. Thursday for a tweet about the debate over net neutrality that featured a prominent typo and an apparent misconception about which president appointed the current chairman of the Federal Communications Commission.

In addition to misspelling neutrality, Trump Jr. was mistaken in referring to Chairman Ajit Pai as “Obama’s FCC chairman.” Although Pai was appointed to the commission by former president Barack Obama, it was President Trump who made him chairman during his first days in the White House.

I would pay good money to see all those people complaining about Obama’s FCC chairman voting to repeal #NetNeutality actually explain it in detail. I’d also bet most hadn’t heard of it before this week. #outrage

He’s your dad’s FCC chair, not Obama’s. I seriously wonder how you manage to dress and feed yourself every day.

Your dad tipped the balance on the FCC commission when he nominated Carr and made Pai the chair. Obama only nominated Pai because 2/5 seats must be given to the minority party (which is why your dad nominated Rosenworcel). You should be embarrassed that you don’t know this.

.@DonaldJTrumpJr Your Dad appointed the FCC chairman, son. Perhaps you should read the paper

Prior to the proliferation of high speed Internet there wasn’t much need to enforce neutrality, and once it became prevalent in the early ’00s the FCC assumed ISPs would largely avoid discriminating among traffic. Well, that wasn’t the case but the methods of doing so were

You’d be wrong, Jun. And why are you referring to Pai as “Obama’s” when it was your Daddy who elevated him to his current role? Also, you must be limiting yourself to very selective information if you’re unaware that WE HAVE BEEN TALKING ABOUT THIS FOR MONTHS. #ShutYourPAIHole