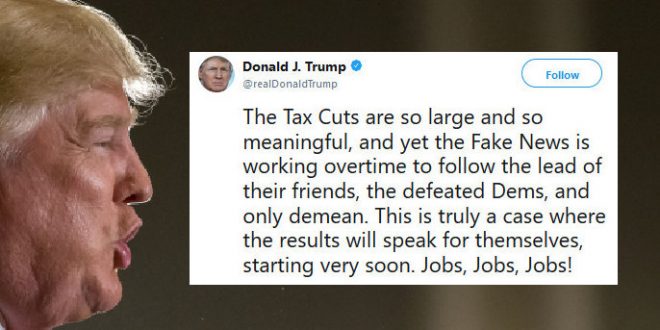 President Trump lashed out at the news media on Wednesday for what he said was demeaning coverage of Republicans’ tax code overhaul. Trump’s tweet came after the Senate approved a sweeping rewrite of the nation’s tax code in a party-line vote early Wednesday. The House, which passed the measure on Tuesday, is set to vote again later Wednesday after a few last-minute changes in the Senate-approved bill.

The Tax Cuts are so large and so meaningful, and yet the Fake News is working overtime to follow the lead of their friends, the defeated Dems, and only demean. This is truly a case where the results will speak for themselves, starting very soon. Jobs, Jobs, Jobs!

1. “Defeated Dems”? Democrats aren’t some enemy military that lost a war, they’re one of the two major political parties in your country.
2. You do realize that job creation is not like Beetlejuice, you don’t just say it three times and they magically appear.

Mueller will finish you, Donnie. You and your tax scam – Hair today, gone tomorrow! pic.twitter.com/hugFgKQ3mg