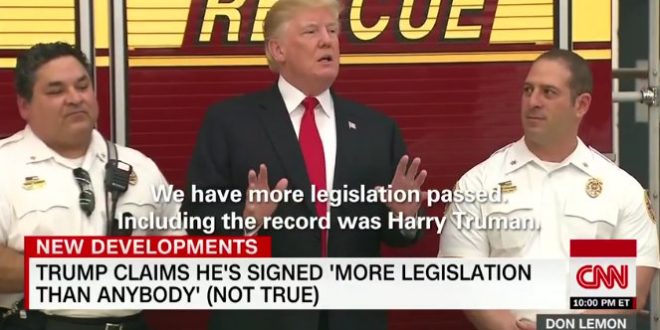 Trump Lies About Having Bill-Signing Record

President Donald Trump falsely claimed on Wednesday that he had signed more legislation than any of his predecessors at this point in their terms.

“You know, one of the things that people don’t understand — we have signed more legislation than anybody,” the president said in remarks to roughly four dozen first responders at a firehouse in West Palm Beach, Florida. “We broke the record of Harry Truman.”

It is true that Trump had signed more bills in his first 100 days than any president since Truman, but as Trump nears the anniversary of his Jan. 20 inauguration, he is far removed from his 100th day.

And he has now signed the fewest number of bills into law of any first-year president dating back to Dwight Eisenhower, according to a recent report from the website GovTrack.

CNN’s @DonLemon: “Nope. Not even close. The fact is — President Trump has signed fewer bills than any President going back to Eisenhower.”
https://t.co/DsTELPvHYG

Turns out he’s actually passed the least since Eisenhower.