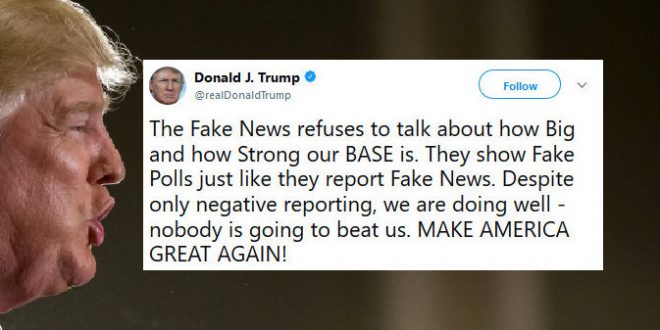 Trump: The Fake News Won’t Say How Beloved I Am

President Trump tore into the news media in a tweet on Sunday, saying the press has not covered the success of his administration and the strength of his political base.

Trump’s comments come after he signed a sweeping tax reform plan on Friday, marking his administration’s first legislative victory. Numerous polls have shown the plan, which would overhaul the U.S. tax code, to be deeply unpopular among the U.S. public.

The president, also, is the subject of polling showing his favorability in the low 30 percent range. Throughout his presidency, Trump has attacked the media as “fake news” over negative coverage.

The Fake News refuses to talk about how Big and how Strong our BASE is. They show Fake Polls just like they report Fake News. Despite only negative reporting, we are doing well – nobody is going to beat us. MAKE AMERICA GREAT AGAIN!

Hitler had a strong base too if you consider 33% strong!

For god’s sake! You have the worst approval ratings than any president at this point in his presidency. I would definitely say that your BASE is dwindling!

Previous Ho-Ho-Ho: Gift-Wrapped Horseshit Mailed To Mnuchin
Next MERRY CHRISTMAS: President Of The United States Shows Press As Blood Spot On Bottom Of His Shoe