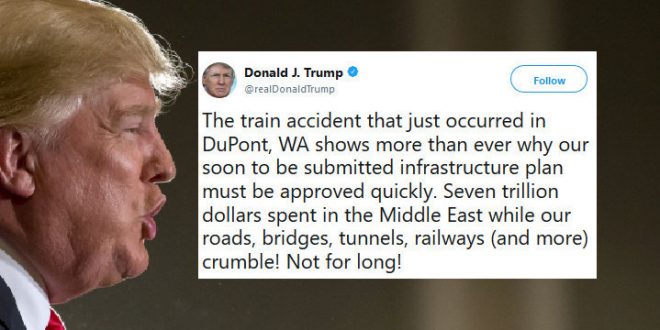 President Trump tweeted that a devastating train crash in Washington state on Monday illustrates why his infrastructure plan “must be approved quickly.”

A timeline for Trump’s $1 trillion infrastructure overhaul — one of his major campaign promises — has been unclear, although it remains a possible next step in early 2018 after the GOP votes on a tax plan,

The train accident that just occurred in DuPont, WA shows more than ever why our soon to be submitted infrastructure plan must be approved quickly. Seven trillion dollars spent in the Middle East while our roads, bridges, tunnels, railways (and more) crumble! Not for long!

Previous Trump Critic Erick Erickson Leaves Fox News: I’m Not Needed Nor Useful To The Network And They Know It
Next Trump Judicial Nominee Withdraws After Failing To Answer Basic Questions During Humiliating Hearing