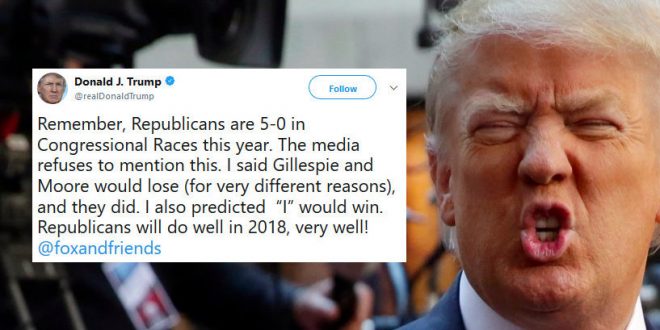 Trump: I Always Pick The Winners (He Doesn’t)

President Donald Trump on Monday predicted that Republicans will perform “very well” in next year’s mid-term elections, touting his party’s record last year in special elections to fill vacant House seats while claiming that he had predicted recent GOP losses in Virginia and Alabama.

It was not clear why the president put “I” in quotation marks. Trump also appended the Twitter username for Fox News’s “Fox & Friends” morning show, a program where he receives almost unflinchingly positive coverage, to the end of his post.

Despite Trump’s claims that he predicted the respective losses of Republican gubernatorial candidate Ed Gillespie in Virginia and senatorial candidate Roy Moore in Alabama, the president was outward in his support for both candidates.

Trump endorsed both and implored voters to support them via Twitter. In Moore’s case, Trump recorded a robocall on behalf of the GOP candidate and stumped for him at a rally in Pensacola, Florida, just across the Alabama state line.

Remember, Republicans are 5-0 in Congressional Races this year. The media refuses to mention this. I said Gillespie and Moore would lose (for very different reasons), and they did. I also predicted “I” would win. Republicans will do well in 2018, very well! @foxandfriends