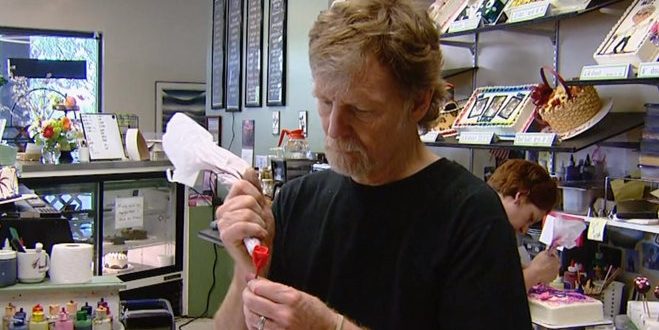 This morning the US Supreme Court heard oral arguments in Masterpiece Cakeshop Vs Colorado Civil Rights Commission, a case which has the potential to upend decades of public accommodation laws that offer business discrimination protections to numerous classes of American citizens.

As noted in my earlier posts about today’s proceedings, all eyes will be on Justice Anthony Kennedy, whose questions spurred hope and alarm to those on both sides of the issue. Several pro-LGBT observers left the courtroom today glumly predicting a 5-4 ruling in favor of anti-gay baker Jack Phillips. Others are somewhat more optimistic.

This afternoon the Court released its 100-page transcript of the oral arguments. Scan through the exchanges yourself and let us know your take. Our CEO @_KShackelford reacts to the arguments on the Masterpiece Cakeshop case from the steps of the U.S. Supreme Court #masterpiece #jackphillips #religiousliberty pic.twitter.com/vIvMHPDTPs

"I am hopeful for two reasons…" @tsurenweber gives an inside look at the #JusticeForJack oral arguments today, with @BrentKeilen. pic.twitter.com/LWWbAn2kt5

What the Supreme Court decides in #MasterpieceCakeshop will decide whether or not we will have equal protection under the law. pic.twitter.com/TiXmkCejcA