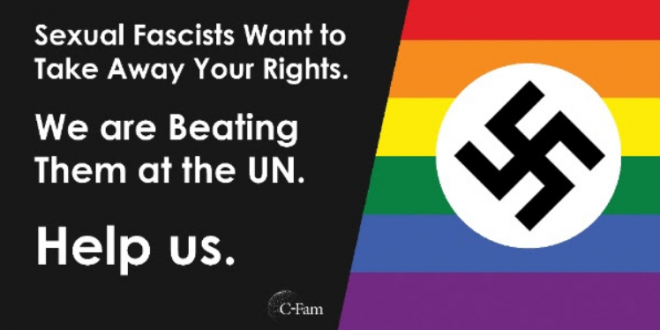 A teacher in Canada shows a video of a free speech hero who stood up against the homosexual fascists. The teacher is about to lose her job. The state of Michigan just took a child from the home of a Christian family because they refused to allow their daughter to transition into a boy.

The state of Colorado wants to shut down the Christian baker because he won’t celebrate a gay wedding. Friends, we are living in fascistic times except this time the hobnail boots are worn by homosexuals and their allies in government and major corporations.

These fascists are out to get Christians who view men and women as God made them and who live their lives that way. They seek to stamp us out. Want to be shocked? Would you like to know the one place where you are free to stand up to the LGBT fascists? Want to know where Christians actually win victories against the LGBT fascists?

The UN that’s where. How do I know? Because we do it every single day and we have many governments behind us. And I will tell you the secret. It is because we are brave. We are fearless. We will not be bullied, we will not step back, and we will always call homosexual behavior sinful, offensive, and deeply harmful to the individual who practices it and to society at large.

C-FAM, the Catholic Family & Human Rights Institute, is a member of the World Congress of Families, the coalition working with NOM and others to export anti-LGBT hatred to foreign counties. Back in April, the State Department appointed Ruse to its delegation to the United Nations Commission on the Status of Women.

PREVIOUSLY ON JMG: Austin Ruse issues money beg to stop the “homosexual buccaneers” at JMG. Austin Ruse says JMG readers are controlled by Satan. Austin Ruse gets fired by the American Family Association after a guest-hosting spot on their radio network during which he declared that liberal university officials “should all be taken out and shot.” Austin Ruse claims that a Vatican priest once offered him absolution if he were to murder Hillary Clinton. During a speech at CPAC 2012, Ruse denounced the United Nations for issuing a resolution against the gay death penalty. Ruse is married to FRC “senior fellow” Cathy Ruse.