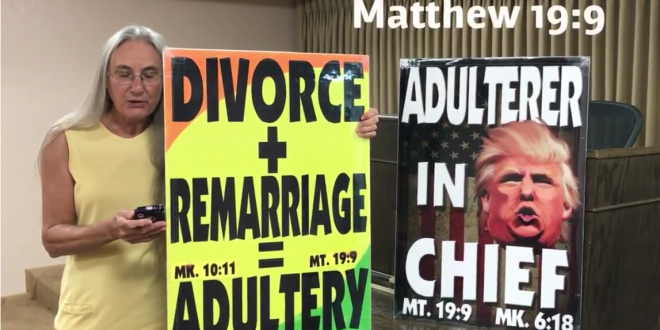 Even the Westboro Baptist Church has had enough of President Donald Trump. The notorious hate group, which often pickets the funerals of dead soldiers and celebrities, plans to protest outside the White House after claiming Trump’s history of adultery puts the country in danger.

The Dec. 4 demonstration will be focused on Trump’s philandering, although it’s unclear if the church is taking issue with Trump’s cheating on his first wife Ivana or with the numerous allegations of sexual assault and harassment against him — most of which occurred while he was married to one of his three wives.

“Your actions show that you have no understanding of God’s commandments, nor of His solemn warnings of destruction. Additionally, your refusal to repent of your proud sin, and to wax more and more build in your rebellion on every front and on so many levels, put this entire nation in peril.”

Tomorrow Westboro will be outside the Supreme Court as it hears the anti-gay baker case.

Previous Billy Bush: Yes, Donald Trump, You Said That
Next Trump Lawyer: A President Cannot Obstruct Justice Because He Is Our Chief Law Enforcement Officer