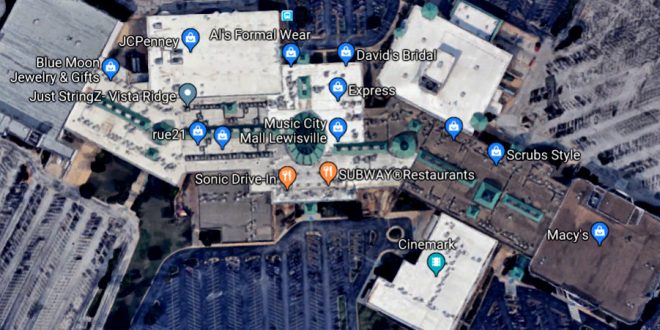 The new owner of Vista Ridge Mall has lots of ideas to make the shopping center attractive to families and even to people who don’t care about shopping.

Odessa businessman John Bushman wants to turn the mall into a community space where people can find some “peace and love” in the Ten Commandments, hear some local musicians perform and take in a giant wave of a 30-by-60-foot American flag outside.

All of Bushman’s other businesses — hotels in Texas, Colorado and New Mexico, other shopping centers and a Chickn4U restaurant in Odessa — display the Ten Commandments engraved on 800-pound stone tablets. In Dallas, he owns the MCM Elegante Hotel & Suites on West Northwest Highway.

There was no question that the Ten Commandments would also become part of the common space in the newly renamed Music City Mall at Vista Ridge, Bushman said in an interview Thursday. Last month, Bushman’s ICA Properties paid $17.3 million in cash for the Lewisville mall and said it plans to spend another $3 million to $4 million on improvements.

“We’re putting the two greatest commandments about loving the Lord and your neighbor on the second level because they weigh about a third of the 800-pound Ten Commandments,” the new mall owner explained.

Bushman joins other companies who incorporate their faith into their business marketing plans. A list of those companies include Interstate Batteries in Dallas, Hobby Lobby in Oklahoma City, and Chick-fil-A in Atlanta. Previous Howard Dean: Trump Is Running A Criminal Enterprise, Shakes Down Foreign Leaders To Stay At His Hotels
Next SRSLY: Russia Accuses US Of Election Meddling