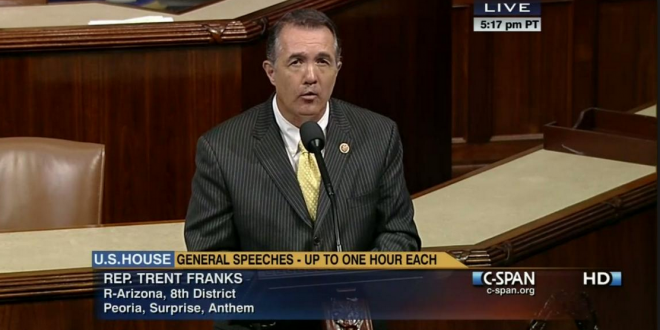 Welp, I bet nobody picked THIS one in the scandal pool.

The sex-harassment scandals have ended the career of a conservative congressman who says his sin was discussing surrogate motherhood. Rep. Trent Franks, Arizona Republican, announced Thursday that he was resigning from Congress, saying that he didn’t want to go through the way his actions would be distorted and leaked about in the current climate.

He said that he had learned that the House Ethics Committee was reviewing complaints about his discussions with two female aides about surrogate motherhood. Rather than suffer through an investigation, he said, he decided to step down.

From his Wiki page: Franks and his wife, Josephine, have been married since 1980; they are members of the North Phoenix Baptist Church. In August 2008, a donor egg and surrogate were used to give birth to their twins, Joshua Lane and Emily Grace.

What even? Franks statement says he asked two female staffers if they would serve as a surrogate for his child pic.twitter.com/NltuSrB86i

Rep. Trent Franks, last seen huddled in apparent prayer on the House floor with GOP colleagues, resigns after asking female staffers to be a surrogate for his child. His statement: pic.twitter.com/F8FXISAjys

Poor feller. He was just auditioning women to be a surrogate for his baby. I’m sure that’s totally normal behavior. He intended “you’d be a good breeder” to be a compliment, in more of a husbandry sense. https://t.co/yXsMokkWAC