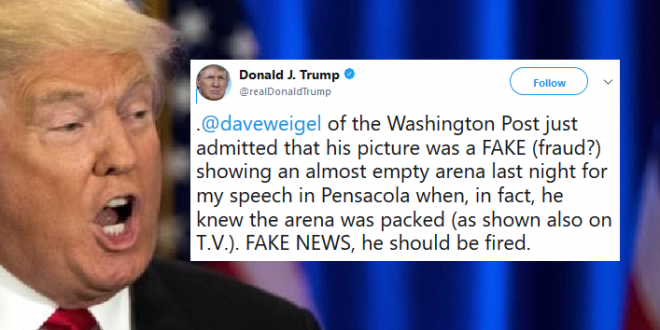 Washington Post reporter Dave Weigel has apologized to President Trump on Twitter after Trump lambasted him for posting a photo from before his rally in Pensacola, Florida, Friday night.

The photo Weigel posted spread quickly online, with Weigel and others thinking it showed the moment Trump took the stage. In fact, it was before the event began.

Trump has attacked reporters for not owning up to mistakes in coverage; Weigel tweeted Saturday night that “it was a bad tweet on [his] personal account, not a story for the Washington Post,” and it’s “very fair” for Trump to call him out.

.@DaveWeigel @WashingtonPost put out a phony photo of an empty arena hours before I arrived @ the venue, w/ thousands of people outside, on their way in. Real photos now shown as I spoke. Packed house, many people unable to get in. Demand apology & retraction from FAKE NEWS WaPo! pic.twitter.com/XAblFGh1ob

Sure thing: I apologize. I deleted the photo after @dmartosko told me I’d gotten it wrong. Was confused by the image of you walking in the bottom right corner. https://t.co/fQY7GMNSaD

.@daveweigel of the Washington Post just admitted that his picture was a FAKE (fraud?) showing an almost empty arena last night for my speech in Pensacola when, in fact, he knew the arena was packed (as shown also on T.V.). FAKE NEWS, he should be fired.

By including Dave Weigel’s @ handle, the president’s statement is inviting followers to gang up on a reporter https://t.co/3C5jKDvFP5

First, @daveweigel‘s pic was not fake; just not taken when he thought it had been. Second, there was no intent to deceive. Third, once he realized the error, he corrected it. Fourth, you called him on it AFTER he’d corrected it, making your whiny tantrum about size the FAKE NEWS. https://t.co/AM0UJ7NVzq

Is “People who say something inaccurate should lose their jobs” really where whoever is tweeting from this account wants to plant their flag? https://t.co/EIiMG5RKnvhttps://t.co/LlnJaQdMvn

While we’re on the subject: has the Trump administration ever officially corrected the claim that the inauguration crowd size was the largest ever, which analysis suggested was super not true? https://t.co/Tr629t97CJ