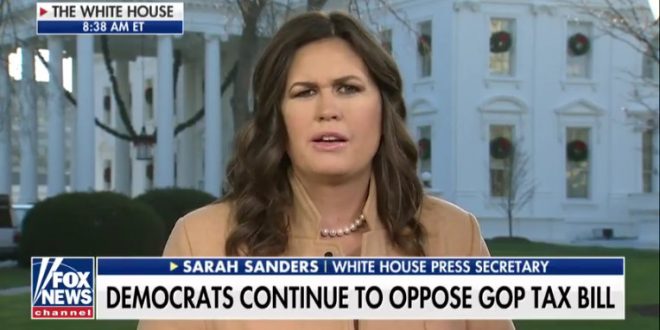 Sarah Huckabee Sanders: Democrats Should Have Been “Begging” To Be Part Of The GOP’s Tax Scam [VIDEO]

White House press secretary Sarah Huckabee Sanders criticized Democrats early Tuesday for refusing to participate in the GOP’s effort to reform the tax code, saying that President Trump would have “welcomed” their input.

Speaking on “Fox & Friends,” Sanders said Trump said many times that he was willing to work Democrats and invited them to the White House on several occasions.

“That’s something that Democrats shouldn’t need to be begged to be a part of. They should’ve been begging and banging down the door of the building behind me to be part of this process and to be part of helping more Americans be more successful.”